Nasadiya Suktam - Before the Big Bang.. 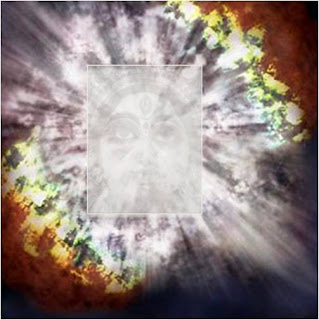 Would be re-writing this soon with slight modifications

Nasadeeya Suktam derives its name from the fact that it starts with ‘Na Sada’, which means ‘Not ever’. It is in a way Na Sada-eeya suktam.

Nasadiya suktam talks about the state of our Universe at the transition from end of Universe to beginning of Universe.

The key point here is ‘Not ever’. Nothing here is ‘ever’. Everything changes. Everything changes fast. That is the nature of this universe. There is nothing that lasts ‘ever’ in the perceptible Universe from stars, galaxies to even atomic and sub-atomic particles.

“Vyom formed by consuming all the fires that raged outside to come to a stable state. And Vyom shone like a blissful woman at that time and it was darkness everywhere else, as there was nothing outside vyom at that time. The nature of Vyom was plasmic(not always bounded, not always unbounded).

From the word Vyom I interpret it as Vayu+Aum, which means gaseous universe.

Vyom does not have death nor does it have life for ever. It keeps changing ever. In that night, as darkness kept surging as vyom consumed every little thing outside it there came a time that nothing existed outside vyom. At that time, first appeared a penis-head at the bottom of vyom. Though its nature was monstrous in that it encapsulated so much of heat that can give birth to millions of galaxies and stars, it was trifle in its appearance.

That penis-head had a hole that connected to the womb of vyom where the Primal Egg was situated as the ‘real’ mind of vyom. That mind of vyom strives to continuously seek the intelligence of evolution. The womb of vyom is the ‘virtual’ heart of vyom. (Mind exists in the heart!)

The penis head got cut up and contents of top and bottom portions of vyom fused at the meeting point, producing a huge explosion with light and sound.  The power of that explosion produced a huge unbounded fire which further exerted on and on and moved away.

Based on the completely observable part of vyom, the one who emits this unbounded fire is only partly known or not known at all.”

From the above description my inference is that the vyom with the penis head below looks like the conch of Vishnu. The Penis head alone may look like the Linga.

Not always bonded, Not always unbounded, at that time, there was no unrestrained fiery activity moving beyond that gaseous universe. What makes this space that shines like a blissful woman/mother..? What restrains/controls this deep abyss..?

Key to note here is Vyom. Vyom, I have interpreted as gaseous universe. (Vayu + Aum). It is the combination of Vayu and Aum. Aum is Universe and Vayu is gas.  Another point is the nature of this Vyom. It was not always bonded (solid). It was not always unbounded (liquid). It was probably plasmic.
So vyom could be defined as Plasmic Universal seed.

And there was no fire beyond this Vyom, which means everywhere else was darkness.
This plasmic vyom shines like a blissful woman/mother indicates beautifully that it was red hot (contended) but not burning. And then it was so deep that we wonder how it is really controlled.

Neither mortality controls it, nor immortality. And it does not have the appearance of one who dwells in darkness. (It shines like a blissful woman). That one fetched all the fires/heat till the end to conciliate (make peace) with itself. Hence there was nothing outside of this rich being whatsoever.

It is because this vyom arose out of fetching of fires/heat till the end  (till any fires/heat lasted outside) and came to a steady state. It has risen out of consuming what it has given rise to. In other words everything in this universe went back into this vyoma. Hence it will keep appearing again and again.

na – Not, mRtyur – death, Asid – control/restrain, amRtam – nectar /life, na – Not
tarhi – at that time, then, at that moment, in that case, na – not, rAtrya – at night, by night, darkness/stillness, ahna – instantly, fast, immediately, Asit – at rest, seated, abode, one who dwells,  Praketa – appearance, sight, apparition, intelligent, knowledgeable, perception, Ani – to fetch, to lead, near, pour, mix, to carry, Davathu – fire, heat, pain, Aanidhavatam – not to cling on till exhaustion, Nidhavate – to rub into one’s person, to press one’s self on, cling to, Tam – till exhaustion, till end,  Svadhaya – propitiate, conciliate, make peace, Tadekam – That one, tasmAd – therefore, on that account, from that, dhAnyan – richy one,  na – not, parah – outside

In that darkness dwelling night of the surging/unsteady universe, first appeared the glans penis (head of penis) (or head of a globular structure). That one was a trifle concealing its monstrous/immense nature which sat on (hid inside) heat that could throw off mighty birth of natural forces.

This suktam says that though the penis head like structure was a trifle compared to its monstrous nature. It hid all the heat that is going to result in the birth of all Devas. Devas of fire, thunder, lightning, air, water and so many other natural forces. All such natural forces are regarded as Devas in our scriptures.

That lowly head offers at first a hole (an opening) to the womb(beginning)  place, which looks like peaked mountain, where its mind is the principal egg which is seated real connecting to the virtual mountain-heart that seeks the intelligence of the evolutionary.

The penis head had appeared on the lower side. It offers an opening to womb place that is situated inside the peaking-mountain structure. And in that womb place the principal egg that evolves this universe is situated.

Typically, what is perceived outside is only the mind and not the heart of a being. Our logics perceive the mind of others and not their heart. Logically, mind is real and heart remains virtual. But heart is physically real and mind is physically virtual.

Similarly our logical understanding is that the principal egg resides in that heart of that mountain, as its mind that seeks the intelligence of the evolution.

The lower portion cut up with a horizontally spreading rays of light, producing an inarticulate sound, impregnating (fusing) that great one’s mouth with the power attained from below, exerting that  power further on.

The penis head that appeared for some reason got cut with light and sound (exploded) thus producing a huge amount of power at the mouth of this great one and exerting the power of that mouth further on.

When explosion occurs light and sound are produced and the exploding part is blown to pieces. The important thing is to notice the sound that is produced.

When explosives explode blowing off something around them, a ‘BOOM’ sound is produced.

But in the explosion that occurred when nothing was there, there was nothing to break and it produced a ‘AOOM’ sound. Try producing a ‘BOOM’ sound when lips are open. Only ‘AOOM’ will be produced.

The suktam says the lower part has not been blown to pieces. It exists. It just got cut up and probably the contents of the lower and upper parts fused at the joints and produced a great explosion, which moved horizontally with an AUM sound.

Combining this with purusha suktam, the three quarters of purusha still exists inside this Vyoma. Only one quarter of purusha expanded to form all this material universe and its beings. In the plasmic universe seed of Vyom, purusha is the material content that formed of the fusion of some materials inside.

The mind of this vyoma, the egg strives to achieve the higher intelligences of evolution.  In that process, this explosion, evolutions of material universe and its beings happen.

According to Purusha Suktam, at some point of time they get burnt up like samith, loose their energy, become black-holes and move back into the vyoma. This process is like the inverted banyan tree with roots up and branches down, with aerial roots moving up.

And then the process described here in Nasadiya Suktam starts.

From the vyoma (gas cloud/gaseous universe that shone like a blissful woman) appeared a lowly head, which got cut up and the contents fused to explode to what the suktam calls as ‘Aba Bhuva’, an unbounded fire, producing the sound ‘Aum’ and light.

The entire universe came from this Aba Bhuva. This is also repeated in Gayatri. It is said “Aum bhu bhuva swa’. Aum (Aum represents creation of this Universe) came into being (bhu means comes into being) from fire (bhuva means fire) on its own (swa means on its own).

The suktam says it is not certain knowledge to proclaim from whom this emission happened from which all natural forces appeared along with the unbounded fire.

ko – who else, of, addhA – in this way, manifestly, truly, veda - knowledge
ka -  who, which, what, iha – here, in this place, pravocat – proclaim before, kuta – from whom, AjAta – born, Kuta – from whom, Iyam – this, this here, visRSTi – letting go, discharge, emission of semen, arvAg – hither (located on the near side), devA – god
asya – mouth, visarjanena – evacuation, evacuating one, atha – now, ko – oh no, veda – knowledge, yata  - governed, controlled,  – unbounded, Bhuva – fire

The one who is emitting this unbounded fire is put in place or not by this observable complete vyom is part knowledge if not knowledge at all.

In the previous verse, the suktam raised a doubt stating who can say with complete knowledge from what this unbounded fire unfolded..? It stated something fused between the lower and upper parts. But what fused…? How the fire started was not known.

In this verse it says that if the observable vyom puts in place the one that emits this unbounded fire is only a part knowledge. It may not be even knowledge at all, meaning it could be even wrong. It is because what makes up this vyom is not known.

And probably vyom has not also been completely observed and known.

iyam – this here, visrstiryata – emitting one, AbaBhuva – unbounded fire, Yadi – as sure as, surely, if, whether, Va – either, Dade – put, sets, lays, put in a place, holds, Yadi – if, Va  - or, Na – not, Yo – one who, Asya – of this, Adhyaksa - perceptible to the senses , observable ; exercising supervision, Parame – chief, primary, most distant, remotest, excellent, Vyoman – gas bag, gas clouds, So – bestowing, preserving, Anga – part, Veda – knowledge, Yadi -if Va –or, Na – not, Veda - knowledge